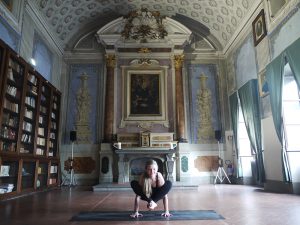 Tess C Obermeier has been a practitioner of yoga since she was 15 years old. Her first yoga classes were at a local community center in her hometown of Chicago, Illinois. She took a liking to the movements, the positions and the way her body felt. She wanted to learn more. Slowly, as she kept returning to her mat, she became interested in trying different disciplines of yoga. She discovered Vinyasa Flow, Bikram, Hatha, Ashtanga and Iyengar. She learned different things in her research and became still more interested in the practice. Her practice gained momentum and she soon became a daily practitioner. Finding a mind-body connection and moving meditation has been what has kept her coming back to her mat. In Winter 2010 she enrolled in a 200-hour Yoga Teacher Training course through a registered Yoga Alliance school in Chicago. In Spring 2011, as soon as she finished, she began teaching. Since then Tess has completed over 150 hours in continued training in Power Yoga, Vinyasa Yoga, Ashtanga Yoga, Restorative Yoga, Yoga Sculpt and Hot Yoga. Tess is an Experienced Registered Yoga Teacher (E-RYT) and has led many Teacher Training courses where she is able to pass on her knowledge to future yoga instructors. She has had the honor to teach in places such as Chicago and New York City in the United States, Sweden and Italy.  In her classes, Tess concentrates on correct alignment and creating a flow for all students. She likes to challenge her students to help them to grow in their own practice. Tess creates a safe space in her classes for love, growth and fun. Nothing is so satisfying as watching a student deepen their practice. In April 2016 she and Guido Baligioni opened Yoga Garage with the intent of sharing yoga in its growing community of Florence, Italy.